Queen City Roller Girls mixed it up a couple of weeks ago. We gathered the skaters from all of the teams: the Dollies, the Saucies, the Knockouts, the Kats, the Furies and all the Queen’s Court skaters and lined them up. Then we picked two teams from all of the skaters.

On Saturday, November 10, 2012 at 7:30 the two teams will take the track at the Rainbow Rink in North Tonawanda for an Expo Bout. We’re calling it: We All Brawl.

“I’m looking forward to a night of fun, like when we were all younger and going to play a game of tag after dinner,” said ShockHer. “Except white is tight and we will win!”

Want to see Day TripHer and Stormie Weather team up against Lamb Chop and Lipservice? Or Ruby Revenge line up on the jammer line against Addy Rawl?

“We All Brawl is my first opportunity to coach in roller derby. I’m looking forward using it as a chance to get my feet wet before I take on coaching the Alley Kats in the coming season,” said Jaded Sins Ability. “Also we have a lot of awesome skaters spread throughout the various teams in the league. So I’m also really excited to be teamed with skaters from other teams that I admire; skaters that under normal circumstances I would be playing against.”

The skaters are split into veterans and rookies. Skaters going into their third season or longer, plus rostered Lake Effect Furies, are considered veteran skaters. They will start out the bout and skate against each other in the first half followed by the rookies (skaters in Queen’s Court all the way up to those going into their second season). The vets will start it out but the rookies have to close the deal.

“I like the set up of the bout,” said Dem Apples, a Queen’s Court skater. “The vets can really show off their talent, but it will force the rookies to keep up their teams momentum. Hopefully we will get a great turnout so more people will be excited about the up coming season. I know I am.” 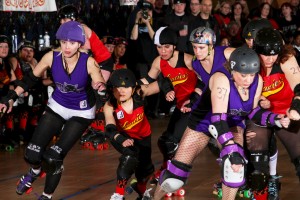 Both CU~T and Pepper Stix, who used to skate for the Suicidal Saucies and Devil Dollies, respectively, and now only skate for the Lake Effect Furies are very excited to be able to skate on their home turf again. “I’m excited because it’s been a long time since I’ve skated with and against some of the skaters in this bout,” said CU~T.

“I’m thrilled to be able to skate with some of my old teammates from the Dollies,” said Pepper, “as well as skate at home again. Hopefully it will be a good way to let the Furies’ fans know we are still here and will have four home games this year.”

“I think this is a great event and can showcase the athleticism and teamwork involved in Derby, as well as giving fans the chance to see player combinations that they normally wouldn’t see.” said Red Hair-ing, a Queen’s Court skater. “I think it’s going to be great to watch!”

The game might look a little different for a couple of reasons. There is the different team mix up and the rules. The Women’s Flat Track Derby Association is redoing the rules of roller derby. The changes aren’t dramatic, but we will be beta testing the new rules set that WFTDA is working on. One of the biggest differences is the start of a jam. There will be one whistle blow to start everyone. Jammers and blockers will all start together.

The Queen City Junior Derby team (formerly the Ice Ice Babies) will also play an expo bout prior to the senior game.

This game is included for 2012 Season Ticket Holders.