It’s well known that once involved, roller derby consumes your life; in a good way of course. But in the case of Mama Chops, roller derby invaded her family.

It was Her Ass Her that put the Roller Derby Bug in Mama Chops’ ear (then Kari Lambright) over a drink and a tuna melt (that got stuck to Her Ass Her’s sleeve) at a local bar. Training camp was coming up, and Her Ass Her told Mama Chops that the Queen City Roller Girls were looking for recruits. Mama Chops knew that her daughter, who played competitive soccer, would love it.

Lamp Chops began training camp and fell in love. She told her brother Tristan, that QCRG was looking for referees. He strapped on some skates and joined. From there Jeff, their mother’s dude, and he also donned the black and white. And so, Senor Wiener and ShockHer were born. 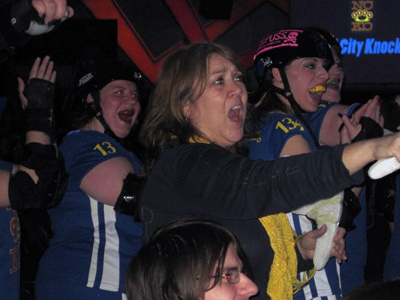 The first year, Mama Chops was a super fan. She concocted the now famous foam chop to waive during Knockout bouts. She cheered for her man, son, and daughter. Then, Lamb Chop mentioned to her Mama that QCRG was looking for someone to put on a Halloween Party. Mama Chops took the project on with gusto. A little more time passed and Lamb Chops came back with another offer…QCRG was again on a quest to find someone special, but this time to head up the events committee. The door was cracked open and Mama Chops dashed right through it.

“I had no clue what I was doing,” Mama Chops said, but she had been itching to put her own stamp on the QCRG bout after parties, so she forged ahead.

Something that we have all come to love about Mama Chops is that the woman is an “idea factory”. She is always searching for that perfect twist to an event to make it special for the skaters, the volunteers, and the QCRG fans. You can’t please everyone, but Mama tries as hard as she can to do just that. “There has been a lot of trial and error”, Mama Chops remembers, “Some things worked, some didn’t.” 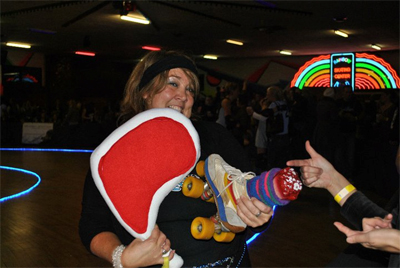 Other notable events wrangled by Mama Chops include the 5th Year Anniversary Party at the Riviera Theatre, the spooky Halloween Party at The Elks Lodge, the prom-themed awards banquets, and QCRG Day including an Art Show at Carnegie Art Gallery in North Tonawanda that leads up to the Championship Bout.

“I didn’t put these together by myself, I had a ton of help from people.”

A fan of roller derby from the start, she is now an integral part of the league. And although she has never skated a moment of roller derby, she is every bit as important to QCRG as the biggest super star skater.