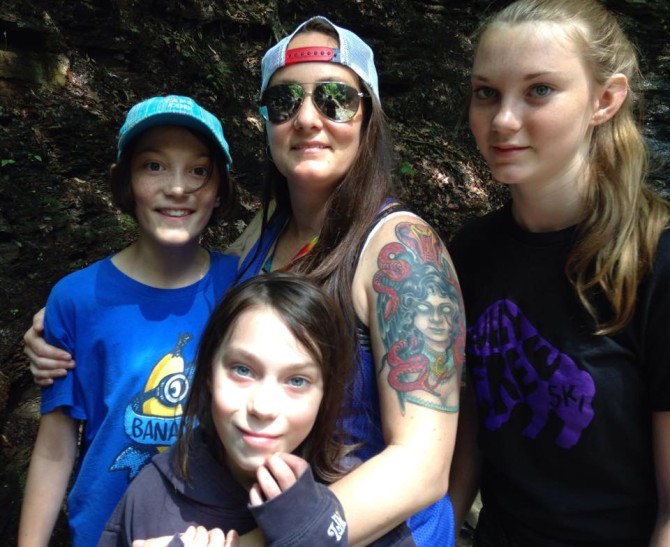 Soccer mom. Ballet mom. Hockey mom. Once a woman has a child it seems she is relegated to the sidelines to cheer her child on; bringing snacks, washing jerseys, and carpooling to early morning practices.

But what about the mom who still wants to play? Who wants to sweat, strive and compete; to keep pushing her limits?

The Queen City Roller Girls, the largest roller derby league in Western New York, plays competitive, full contact roller derby at Buffalo Riverworks. Included in their ranks of skaters, coaches and referees are 35 mothers of babies and toddlers through teens all the way to young adults.

They are moms who hit.

Roller derby is one of two full contact sports for women (the other being rugby). It’s also one of the fastest growing sports in the world. When the Women’s Flat Track Roller Derby Association (WFTDA) first started in 2005 they had 20 teams all in the U.S. Now they have 369 leagues that stretch across five different continents.

Some of the moms played soccer, volleyball or field hockey in school and missed playing on a team. There aren’t too many sports out there that take all comers.

You don’t have to be a certain body type. Roller derby embraces every shape and size as long as you are willing to work hard.

As a mom women are used to sacrificing and putting their kids and families first; sometimes at great expense to themselves. It’s motherhood right?

But what about moms who make the choice to sometimes put themselves first? Leave the kids at home to head out for roller derby practice or a game (or a fund raiser, or a team dinner).

Maggie Bratko (derby name Maggie de Sade) has been playing roller derby with QCRG for seven seasons. She has three daughters, ages 17, 11 and 9. She started playing roller derby because she had watched it on television when she was younger and had always wanted to play it. What she didn’t realize when she first strapped on her gear and her skates is how involved the sport can be.

“It can be a very time consuming sport,” said Maggie. “I have to tell myself I deserve this. I always put my daughters’ needs before mine and sometimes I feel selfish when I’m leaving for practice or a game.”

Roller derby certainly does take time. Skaters attend 2-3 practices a week, plus committee meetings, attending games (both as volunteer and skating). And working out. In the beginning, when you start roller derby you think: “this is a great workout.” But six months to a year in and you realize that you need to workout to play roller derby. So add that to the list of things you want to do.

Michele Alund-Yaeger (derby name Audrey HipBurn) just started in roller derby boot camp this year. Every Sunday morning she gears up and sweats on the skating rink trying to learn the basic skills you need to be able to play the game. The first time she took Skyelar, her 20 year old daughter to watch a game, Skyelar said:

“Dear God mom are you crazy! Do they know what a cry baby you are?!”

“By being brave and doing something hard and new to me, I’m teaching my daughter to be brave,” said Alund-Yaeger. “I’m part of something greater than I could ever have imagined.”

But what about the babies? You can’t play derby when you have babies. Or can you?

Corinne Eberwine (derby name Wrecks Kitten), mom to a 5 year old daughter and 15 month old son, has been playing roller derby for 7 years. She took a year off each time she had a child. And each time she came right back to derby. It was important to her to skate and important to be a role model of a woman who sometimes puts her needs first.

“Being able to treat my well-being as a priority is huge, I think, for being a great mom,” said Eberwine. “My kids are more important to me than anything, but I need to acknowledge my own needs as a person in order to be able to be the best mother to them that I can be. And I hope they see that parents can have their own identities and interests and hobbies in addition to their roles as “mom” and “dad.” Balance in life is key.”

Jessica Campbell-Lewis (derby name IVy Pusher), has two children ages 4 and 6 and also just started in roller derby boot camp. She joined derby because she wanted to keep active after weight loss surgery but has found a community and support that she didn’t realize she needed.

“I wanted my kids to see me as a role model of a strong woman. Even when I fall down, or miss doing a skill, I get up and try it again. I keep at it until I get it right,” said Campbell-Lewis. “I want my kids to do that too.”

And then, of course there’s the tough derby player “cred” you get. Heather Paul (derby name PaulverizHer) says her son, age 6, while standing in line at the grocery store asked: “You going to go knock the girls down later Momma?”

He was asking if she was going to derby practice later.

There is the time when you leave your teenager in front of the computer for the 5th hour so you can watch footage, or go to the gym, or catch a nap before practice. Some times, you chose you, instead of them.

Derby teaches so many lesson, if you let it. “How to be strong and work hard for what’s important to you, and how to play together with a team,” said Eberwine. “That winning is fun, but even when you lose you can still be proud of how you played; if you tried your hardest and played with integrity.”

“It goes the other way too,” added Eberwine, a thought echoed by many of the moms in QCRG. “Being a mom has helped me be a better derby player. I’ve learned more patience, and flexibility when it comes to ways of thinking and strategy–always being prepared for the unexpected and able to adjust and adapt quickly without being too thrown off mentally.”

Moms interested in joining QCRG can always reach out to training@qcrg.net, whether to skate or volunteer to help with the league.