So, you think you’ve got what it takes to be a derby girl. You’ve got skates, gear, maybe a tattoo or two, and some attitude. That’s great. But eventually, everyone has to take off the helmet and close the competitive derby skater chapter of their life. Do you have what it takes to survive life after skating derby?

Sometimes it’s an easy decision. Derby just doesn’t fit into your life anymore. But for others, it can be a struggle, heartache, disappointment, or regret; like the ending of an intense relationship.

Violet Intentions #18, a three-year veteran skater, co-captain of QCRG’s Devil Dollies and skater of the former QCRG All-Stars (now know as the Lake Effect Furies) shares her story of taking off her derby helmet and her life after being a competitive skater.

What was it that attracted you to derby?
At first it was the pure physicality of the game. I love contact sports. Developing the combination of skills that are needed to play roller derby was challenging mentally and physically. You have to play offense and defense and change gears on the fly. It is exhilarating. The sisterhood that came with it was a pure bonus. 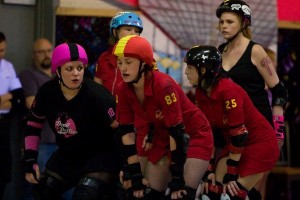 What was your favorite moment as a skater?
It’s really hard to pick just one, there are a lot of them. How about the top three?
1.) Dollie road trip to Montreal to compete in the Beast of the East Tourney (and all the shenanigans that ensued.)
2.) Bouting, of course. Connecting with my jammer, pulling her through the pack, and whipping her ahead all while booty blocking or hitting the opposing players.
3.) Diamond Crushher hitting me so hard that my ribcage did the wave, from then on I wore two sports bras to practice.

Why did you stop skating?
I stopped skating because of a back injury. I have a slipped disc that is fractured – narrowing the nerve canal, and a bulged disc that is torn.

How did you cope?
How did I cope? Not well. I went into a depression. When my doctor told me the news, I was sobbing. I had found a sport that I loved to my very core and he was telling me not to play anymore. It was tough. I was still co-captain so I needed to put on a brave face and carry on with my duties, off skates. It was really hard.

Who were the people to help you with the transition of not being able to skate any longer?
There were a few teammates who really helped me through it. I got a lot of support from the team, but especially from our coach, Diamond Crushher, the captain (and other half of my brain) Bea Aggressive, Fetishly Divine, Busty Pipes, and HerAssHer. They really kept me sane, and still do.

What was it that made you stick around and stay involved?
I stuck around because I love this sport and even though I am no longer competing, I’m not ready to step away just yet.

What is or was your favorite moment as a non-skater?
I have to say cheering the Dollies on to victory when they won the QCRG Championship in the 2011 season and brought home that cup.

How has derby, no matter how long or short you may have skated, changed your life?
It’s tough to put into words exactly how derby changed my life, it did in many ways. Derby pushed me, challenged me, bruised me, took me beyond my limits – and I always came back for more. With a big silly grin. Then there is the team, my sisters in combat, the girls I came to know by sight/sound/and of course smell. That great sisterhood that you wouldn’t trade for the world. Those girls, my Devil Dollies, changed my life.

Is your derby “family” still there for you?
Yes, a lot of the old derby “family” is still in my life. Some of the girls I only see on bout day or at league events… but there is a core group of us ‘old girls’ that hang out or get together every little bit. There’s also the few that I talk to almost every day. I’d say we are friends for life.