The Queen City Roller Girls are rolling into the 2013 season with a doubleheader at the January 5th home opener “Three’s Company.” The Suicidal Saucies will be taking on the 2012 Queen City Cup Champions, the Nickel City Knockouts at 6:45 p.m. followed by the Lake Effect Furies taking on the Black-N-Bluegrass Rollergirls from Kentucky in a WFDTA sanctioned game.

Get your tickets here.

The last time the Saucies and Knockouts met was in the 2012 playoffs when the Saucies came oh-so-close to an upset in the first half of the game. The Knockouts readjusted at the half and won it handily, but the Saucies surely made them work for it. 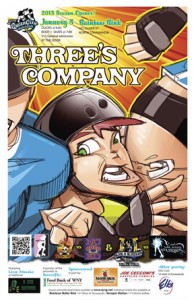 The Saucies picked up some talented new skaters in the draft including Miss Fire, Violent Femme, and Arti Choker and will certainly be looking to knock the Knockouts off their throne. The KOs, however, picked up LiBrawlian, the skater who made the Lake Effect Furies roster after three practices. The Knockouts have played several out of town games this summer and they are ready to bring it back to their home rink.

In addition to all of the new talent, the sibling rivalry a little spice to the evening. Knockouts captain, Lamb Chop, and Saucies’ coach, Senor Wiener, will be on opposite side of the track.

“My brother and I are definitely competitive and have been for a long time,” Lamb Chop said. “But we also have no issue giving credit where credit is due after the dust settles.”

Senor Wiener seems to share this sentiment. “I really enjoy my sibling rivalry. I don’t think there is any better way to perpetuate our childhood competitiveness than to coach against the team my sister is captain of,” Wiener said.

Mama Chops was also asked to weigh in on the subject as she gets set to watch her offspring battle it out on the track. “I don’t want to play favorites, so I try to be neutral. I’ve got both a lamb chop a wiener to wave around. I’m very proud of how far each has come in QCRG – captain and coach!”

In the second game of the evening, the Black-N-Bluegrass Rollergirls will be travelling over 450 miles from Latonia, Kentucky to play against the Lake Effect Furies in this WFTDA sanctioned event. Currently, the Furies are ranked 13th in the East, and the BBRG are ranked 27th in the North Central region.

With a new season at hand, you’ll notice some big changes in the game. WFTDA released new rules, which eliminated all minor penalties and begins a jam with a single whistle start. There are some other changes as well, but we’ll have people in the crowd who can answer questions and some information on the screens that should help explain the rules.

Tickets are going fast for the season opener. Get ‘em soon at www.qcrg.net or at the Rainbow Rink or Terrapin Station.