As the Queens Court team the Rollin’ Royals took to the track on Saturday, July 14 in Toronto, Ontario, they found a floor that was slicker than they were used to, a venue that was sweltering, and nerves that had kicked into high gear. Led by Coach Ace Bandage, the seventeen rookies and two first-year players took on other teams in a fresh meat tournament hosted by GTA Rollergirls.

In their first bout at the Ted Reeve Community Arena, the Royals faced the Gold Miners’ Daughters from Timmins, Ontario – the defending champions from the 2011 2F2F Tournament. While showing some initial apprehension during the 20-minute bout, the Royals learned to cope with the unfamiliar floor as the jammers tightened up their steps. 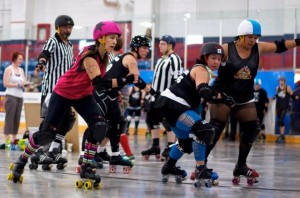 “When I got through the pack and started the turn I almost wiped out,” said the Royals’ Violent Femme about her first attempt to jam on polished concrete. “Boo D. Bloxx told me the key was to take lots of quick, small steps instead of long strides. It was amazing the difference that little adjustment made.”
With 7:04 remaining on the clock, the Royals found themselves at a 32-8 deficit. The team began to jell and push harder. By the last jam, the Royals had held their opponent to no points and were trailing by only 3 points (29-32).

In the final jam, the Royals blockers worked together to break the opposing team’s walls and hold off the Miners’ jammer while pushing their own jammer through in a fight for points. But when the final whistles blew, the score was 36-33, with the Gold Miners’ Daughters skating away with the win.

“I played great. I made a lot of good clean hits and blocks,” said Queens Court’s Wailing Wench. “Ace Bandage was an awesome coach.”

With only a brief intermission to recover, review and make a run to the ice cream truck outside, word came that the Royals would be moving from the Bubble to a different rink in the arena. They quickly assembled equipment, changed, prepped and began warm-ups. 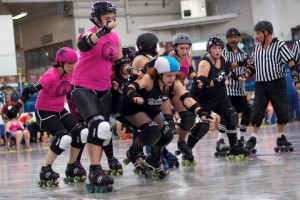 The Royals had brought with them 19 skaters. So for the second game five players stepped out to cheer for the team and the five who had watched the first game geared up to skate. Now roles reversed – it was time for a new roster, a new floor, new team of refs and new opponent to face who was also fighting to stay alive in the double elimination tournament. “Every Court member who was available was rostered and played, which was great for morale,” said Wench.

The strategy set a precedent for the rest of the game, with the Royals building walls and pushing hard to hold their ground. The group trailed the entire game but deftly adapted to the opponent’s strategies, hitting opposing jammers off the line at every chance.

“It was great to try out strategies against opponents we haven’t seen,” said Arti Choker of Queens Court. “Plus, we saw what kinds of strategies other leagues are using and that’s always helpful to grow as a player.”

As the game moved forward, the new group of 14 put into action all they had learned about creating formations and communicating as a team. They held the inside line and worked hard to ladder as the Debutants broke the pack by slowing their speed. And—just for good measure—during the last jam the Royals surprised the Debutants by performing a panty pass.

The final score of the bout was 85-17 in favor of The Derby Debutants. Although this meant the Royals were out of the tournament, the team felt victorious. They had worked together, implemented strategies learned in a few short weeks, and christened new players into their first bout. The group walked away wiser to the game and had learned what to improve as individuals and as a team.

“It was bittersweet,” said Arti. “I feel that we had some amazing jams and then we were done after the second game. For myself I felt I did well. I mean, I finally felt that my feet were doing what I wanted them to do.”

The Rollin’ Royals will be playing again over Labor Day weekend, when they will face the Babes of Wrath on Buffalo turf. The group of draftees, who are the immediate future of QCRG, will not disappoint as they dish out their newfound moves. The future of derby is bright thanks to the members of Queen’s Court, their dedication to the sport of roller derby and the veterans of the league who dedicate their time and coaching talent.