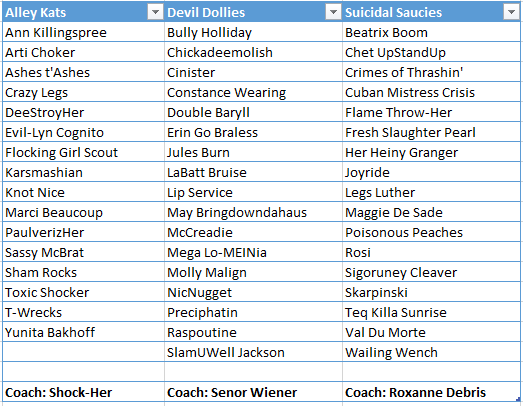 You may have noticed that the rosters are considerably different then last season, additionally, you may have also noticed there are only 3 teams. Following last year we had a larger than usual number of skater retirements as well as some internal challenges. In response to that our membership voted to hold an all-skaters draft of the home teams going into this coming season. This is a concept that had been proposed in previous offseasons, which our members voted to adopt this summer, the draft for which just occured tonight. Also, due to the decrease in eligible skaters, the Nickel City Knockouts will be on a temporary hiatus. We know the Knockouts mean a lot to our fans and we hope to have the name back again for the 2017 season as we get more eligible skaters.

While we recognize that for our long time fans these changes may be hard to stomach, our membership asks for your patience and understanding. Our goal is to improve the long term health of our organization by focusing on being members of Queen City Roller Girls first and foremost, even if it does mean sacrificing some of the passion that had been inherit in our home squads. Several other roller derby leagues in the region have made similar decisions and found that while the change is difficult they have seen overall league camaraderie improve as a result. We’ve also been working on internal restructuring including the election of our new Board Chairperson, Joyride, and Executive Director, Boo D. Bloxx, (learn more here).

While we will have one fewer home team this coming season we will be forming a new B-Travel team – expect more on this in the coming weeks. Additionally, our All-Star Travel team, the Lake Effect Furies, will look to build on their most successful season yet having secured a spot as one of the top 40 squads in the world with their invitation to the WFTDA Divison 1 playoffs.

In the coming days and weeks we are excited to announce more on our upcoming season including our schedule and the many exciting things we have in store for the coming year. This will be our tenth season, and we look forward to continuing to entertain the Western NY community for many more years to come!

Thanks,
The Queen City Roller Girls