The Arch Rival Roller Girls All Stars have been on an upward trajectory in 2012, closing the regular season with a 12-2 record overall and a 7-1 record in the North Central.

In 2011, the ARRG All Stars finished the post season ranked 6th in the North Central. “Finishing 6th at North Central Regionals was bitter-sweet for us. We came into that tournament ranked 8th, so we improved our ranking; but after trading wins/losses with the Chicago Outfit throughout the season, losing the 5th place game at the end of it all was difficult,” says All Star blocker Shimmy Hoffa. 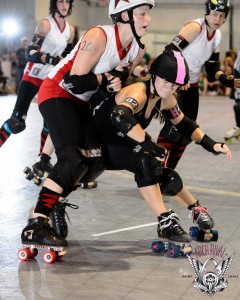 Arch Rival started the season slow, with a narrow 131-121 win over the Madison Dairyland Dolls. A few weeks later, they suffered a disappointing 53 point loss to the rising Ohio Roller Girls. But by mid-season, ARRG managed to work out some of their kinks and had a strong showing at the North Central tournament Brewhaha, pulling out an upset win of 186-130 over the then higher-ranked Detroit Derby Girls. Arch Rival experienced their second and last loss of the 2012 regular season at the hands of the South Central #1 ranked Texecutioners (106-210), but went on to defeat South Central #3 Houston the next day (159-138). In July 2012, Arch Rival solidly defeated their 2011 rivals the Chicago Outfit 191-100. The culmination of the season, and most telling of ARRG’s growth, is their recent upset of the North Central #3 Naptown Tornado sirens, posting a 115-99 win.

As for Arch Rival’s recent rise, veteran blocker Grave Danger says, “I wish I could tell you that there was some magic formula. But no, we’re working together as a team, training as a team and everybody’s hard work is coming through.” All Star jammer Downtown Dallis adds, “We are training hard, cross training outside of practice and developing our own strategy that works for us. We push each other, work hard together, and we try to keep each other in one piece. Our team is motivated and hungry.” 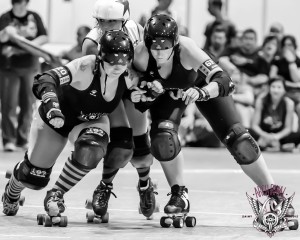 Arch Rival enters the post season ranked 4th in the North Central, the highest rank the St. Louis crew has ever experienced. “I don’t think I’ve ever been so excited about this team’s potential,” gleams veteran blocker Eli Wallop.

The Arch Rival Roller Girls were founded in 2005 and boast 4 local teams and 3 travel teams: the ARRG All Stars, St. Lunachix and the newly added c-team Fleur-de-Linquents.