North Tonawanda came out for QCRG Day as the league and the city partied all day at the Carnegie Art Center. A parade down Goundry Street led the fans to the final championship cup bout of 2012. The Nickel City Knockouts stomped through the season with sound defeats of the Alley Kats and the Suicidal Saucies and met up with the two-for-three Devil Dollies to battle it out for the Queens City Cup. The Devil Dollies tried to make up for their first game loss to the Knockouts by manhandling the other two teams to achieve the runner-up spot and a repeat shot at the Cup. 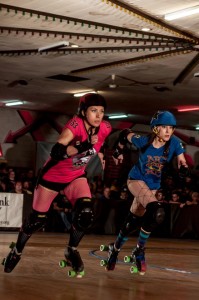 By 7:40 p..m, the 2011 Champs, the Devil Dollies, and the Nickel City Knockouts were ready to roll. Within the first three jams, the Dollies jammer went out on a major penalty and the KO’s were up 35 to 6 with Toots McGee (22) scoring 15 points in jam 3. The KO’s would keep this pace to lead the DD’s 63 to 32. The tide started to turn when Day TripHer (711) jammed for the DD’s in jam 11 and grabbed 19 points while the KO jammer, Midnyt Maniac (46), skulked to the box. KO defense regrouped and had Red Fox’s (41) number from the moment she stepped up to the jammer line. Pushing her to the outside line and taking her out on the corner, the KO’s forced Red Fox into making a cutting the track penalty and she was sent to box. The Dollies would remain scoreless for the next four jams while, Crazy Legs (24) exploited the opportunity to its fullest and cranked out 24 points. The end of the half saw a frustrated Dollie offense go off to the locker room to recharge for the next period. Halftime score: KO’s 131, DD’s 61.

The second period started with Day TripHer (711) jamming and taking a defensive stance skating backward against Ambercrombie & Fists (99). The Devil Dollies looked rejuvenated and LowHits Griffen (153) and Day TripHer grabbed a few more points and quickly passed through the KO defenses. Lip Service (360) jumped onto the jammer roster in a partially successful effort to rattle BJ HARMStrong’s (134) cage. The KO’s defense who had been dominating all night, tightened up their walls and stepped up their relentless hitting game led by Ivana Leiherout (240) and Midnyt Maniac (46).

Unfortunately, the new found Dollie energy didn’t last for long. The 7th jam put the Dollies even deeper in debt after Day TripHer got sent to the box leaving Ambercrombie & Fists alone on deck to sweep up 15 points. While Low Hits Griffen and Vile Love It (644) had a couple of successful turns around the track (picking up 13 and 14 points in single jams respectively), the Dollies were reined in by the KO’s defense and only scored in 11 out of 20 jams in the second period. Staying positive and keeping core defenders Ivana, Midnyt and Lamb Chop (71) on the track as much as possible led to a consistent and focused strategy that commanded the width of the track.

img src=”https://www.qcrg.net/wp-content/uploads/cup-5-300×200.jpg” alt=”” title=”cup 5″ width=”300″ height=”200″ class=”alignright size-medium wp-image-5699″ />The Knockouts physically dominated the Dollies when it came to hitting and controlling the pack in large part to the leadership of their captain Lamb Chop (who also at one point received the passed star and jammed). It is obvious the Knockouts planned to win this game from the day after they lost the cup last year. By playing it smart in the draft they knew they needed a deeper jammer bench, better physical conditioning and a more diverse defensive repertoire. Another huge asset to the team has been the coaching staff – and the brains of the KO’s – SuperNova and Lindy Reff, both of whom are known as a couple of the best teachers in the league.

Congratulations, Nickel City Knockouts, and thank you Devil Dollies for a great game. And thank you, QCRG for another great season of roller derby. Though many of our teams play over the summer, we can’t wait for another home season to start in January. See you all next year!