Skip to content
This weekend, the Lake Effect Furies head to Kitchener-Waterloo, Ontario for the 2014 Women’s Flat Track Derby Association (WFTDA) Division 2 Playoffs where they will be competing as the tournament’s #2 seed. A top finish this weekend would secure a trip to the 2014 D2 Championship this coming November during the WFTDA Championships — the other Division 2 Playoff, held in Duluth, Minnesota this previous weekend, was won by Detroit Roller Derby.

The winners of the Friday game will play in the tournament semi-final Saturday at 8:00 PM against the winners of the Friday matchup between #3 Rideau Valley Roller Girls (Ottowa, ON) and the #6 Boulder County Bombers (Boulder, CO). The Furies have played Rideau multiple times, most recently at Toronto’s Quad City Chaos tournament in March of 2013 where Rideau won 172 to 147. Rideau enters the tournament winning 7 of their 8 games in 2014, including wins over DC, NEO, and our neighbors in Rochester, Roc City Roller Derby. Boulder County only became a full WFTDA league in September 2013 but has quickly risen in the rankings bolstered by a big win over Sin City Roller Girls (Las Vegas, NV) – runners up in the D2 Playoffs held last weekend in Duluth. 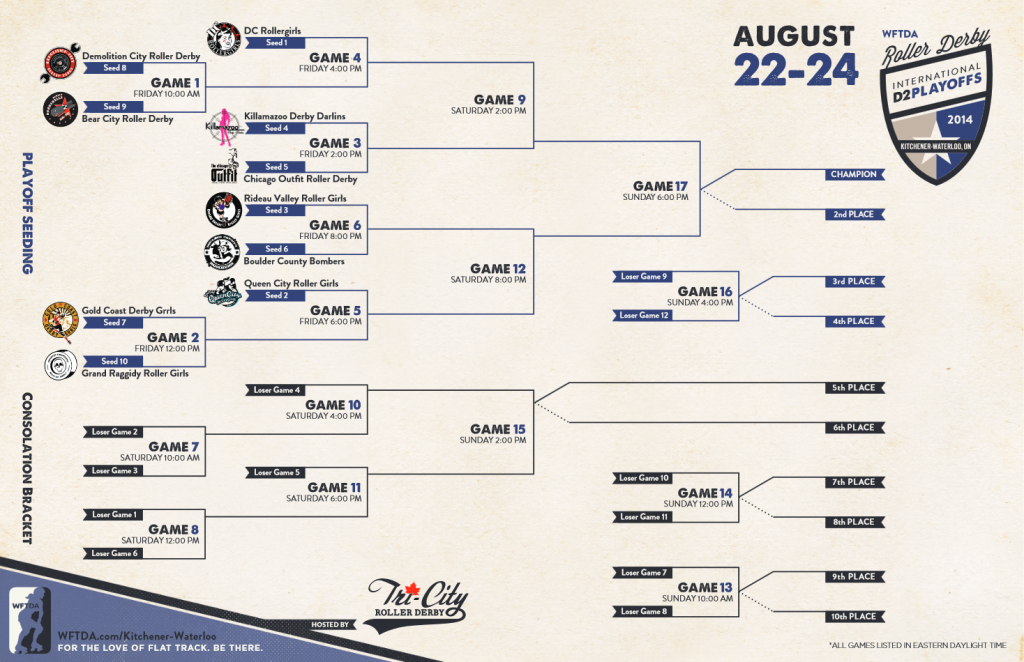 The tournament championship will be Sunday at 6:00 PM, preceded by the 3rd, 5th, 7th, and 9th place games. A full consolation bracket ensures all teams play games all three days of the tournament. Both teams participating in the championship game guarantee a trip to Nashville in November for the 2014 WFTDA Championship where they will compete for the D2 Championship (if they win) or for 3rd place (if tournament runners up). Other competing teams include aforementioned DC and Chicago Outfit, and #4 Killamazoo (Kalamazoo, MI), #8 Demolition City (Evansville, IN), and #9 Bear City (Berlin, Germany). Full bracket and tournament details available from WFTDA – along with ticket and venue information for those making the trip. Also if you cannot make it in person, the entire tournament will be broadcast live online on WFTDA.tv.