The East Coast Derby Extravaganza, hosted by the Philly Roller Girls, has become one of the places to derby during the month of June. Founded in 2007, this was the sixth year of the full weekend filled with sanctioned and challenge bouts as well as open scrimmages running simultaneously on three tracks. It is an amazing whirlwind of awesome derby whether you are a spectator or a skater.

On the last night of the three-day event was the much anticipated Team USA Stars vs. Stripes game, which saw sixty minutes of amazing roller derby. The Lake Effect Furies’ Addy Rawl played for the Stripes team (confirm). 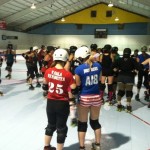 Prior to the start of ECDX, Team USA skaters ran a training camp and Lake Effect Furies skaters Pepper Stix and Gibby S’More attended many of the sessions. Addy taught an agility class with Claire D. Way at the training camp.

Pepper was at the camp for both days, Thursday and Friday, and took 12 different classes that seemed to cover every part of derby you could ask for.

“The 12 hours of training over the two days was incredibly intense,” said Pepper Stix. “I learned a tremendous amount.”

The classes were taught by some of the most well known and admired derby skaters including Teflon Donna, Atomatrix, Smarty Pants, and Fisti Cuffs, (and, of course, Addy Rawl) among many more. “It was so exciting to meet skaters who I’ve admired for many years,” said Pepper. “All of the teachers were full of wonderful advice and suggestions and made the classes fun.” 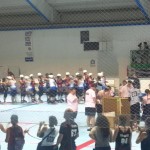 The classes were in everything from basic skating skills, where they focused a lot on using your edges to give you more power and agility, to strategy and scenarios which dissected the scrum start. The strategy classes also talked about the importance of knowing your basic strategies so the whole team knows what to do in different situations.

“The inside and outside players are the ones who help stabilize the inside players and form that impenetrable wall,” said Gibby, who took all of the classes on Friday.

Some people might think that speed skating isn’t going to help with derby skating, but the class taught by Atomatrix went over stride and body position (keep your body square) and was completely applicable to derby, both Gibby and Pepper said.

The classes on agility taught, among other things, how important it is to be able to do a variety of things on your skates. You never really know what’s going to happen during a jam. You might need to jump over something, hop sideways, stop, turn, run on your toe stops. If you don’t practice these things and increase your agility, you might have trouble during a game.

The blocking class touched on so many things, but one stand out, according to Pepper, was the importance of keeping the blocking position. If you have the jammer or the goat behind you and you bring her to a stop you need to keep low and down. If you stand up, you’ll likely lose her.

“There was a lot of talk about ‘exposure points’ or ‘targets’,” said Pepper. “As a blocker you need to limit the exposure points that you give to your opposition. These are places that you can get bumped; think hips and shoulders. Leaving those points open makes you vulnerable.

“For example, if you are in a wall and the jammer is up on your back, keep your back square. If you turn your whole shoulder to look at her you just gave her a target: your shoulder. Now she can hit you there and squeak through.

“And on the other side of things, if you are the jammer or goat always look for these exposure points and take advantage of them.”

Pepper, Addy and Gibby are working together to put together some practice agendas to teach these techniques to the entire league once practice begins again in September.