The WFTDA Division 2 Playoffs, which will be held in August in Des Moine, Iowa and Kalamazoo, Michigan, will consist of those teams ranked from 41 – 60 after the June 30 rankings are released. Currently Burning River sits at 60 and the Lake Effect Furies sit at 61.

That playoff goal of the Furies is closer than the smell of Cheerios baking in the morning sunshine.

Both teams need this win.  The Furies need a decisive win in order to hopefully boost themselves up into Playoff land and Burning River needs the win to stay where they are. 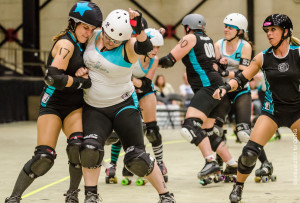 They have played one opponent in common:  Ohio.  The Furies lost 211-125 and Burning River lost 280-89.   In comparison, the Furies came out ahead after their game against Ohio since they lost by less points than Burning River.

It is sure to be an intense game.

Warming up the track for the travel teams will be Syracuse, NY’s Black Mamba Junior Derby and the Queen City Junior Derby skaters.  These girls will skate a full, regulation bout (two 30 minute periods).  The juniors skate at 6:15 and the senior bout will start at 8:00 p.m.