The Lake Effect Furies are excited and thrilled to announce that the team has received an invitation from the Women’s Flat Track Derby Association (WFTDA) to attend this year’s Division 2 Playoffs in Kalamazoo, Michigan on August 23-25.

“It is extremely relieving and satisfying to make D2 Playoffs. The Furies have had a goal of making Playoffs for some time now and to finally see it realized is truly rewarding,” said Furies Co-Coach, Guy O. Tine. “Every player on this team has contributed both on and off the track and can take pride in knowing that we started out as a long shot but once our back was to the wall we responded with a will and desire that simply would not be denied.”

“We have all learned, grown, and bonded as a team this season and I think that shows through in the team’s cohesion on the track and work ethic at practice. Now that we’ve finished part one of our goal, being invited to Playoffs, we can start thinking about the next step – showing everyone at Playoffs exactly what Furies derby is all about.”

Teams that are ranked 41-60 on June 30 are eligible for the Division 2 Playoffs. The last official rankings released by WFTDA for April 30, put the Furies at 61. Obviously the Furies have moved above 61. However, for the moment, the exact number doesn’t matter. The team is somewhere between 41 and 60 and is very excited to be heading to Division 2 Playoffs.

“We are so grateful to the entire league for all of their support this year and in previous years,” said Captain CU~T. “We couldn’t have done it without the entire support of QCRG and our fans.” 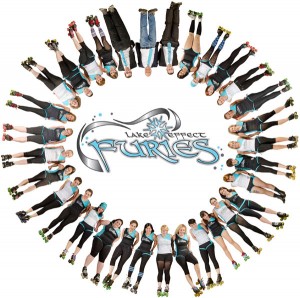 Some of the teams that will be joining the Furies at the Kalamazoo D2 tournament are Burning River, Suburbia, Tri-City, Paper Valley and Carolina. The winners of both Division 2 Playoffs will meet in Milwaukee, Wisconsin in November at the WFTDA Championships to play the deciding Division 2 game.

The Furies will be heading to Tampa, Florida on July 20-21 for another tournament. This will help the team get into the tournament frame of mind and they will bring that mindset to the Division Playoffs.

The team is continuing their fundraising efforts to cover the cost of attending the Playoff tournament. You can help by donating to the GoFundMe account: http://www.gofundme.com/2q9gj4.