Have you ever been mid-way through a bout or scrimmage and thought, “When is this going to be over?” or “It’s only been 10 minutes? I’m dying!” If so then that likely means you’ve got to improve your endurance.

Many times the losing team is determined by who lost steam during the final 20 minutes of play. Tired skaters have slower reaction times and often get sloppy – which gets them sent to the box. So if you want to change from “When will these 30 minutes be over?” to “Wow, those 30 minutes flew by!” you need to work on your endurance.

Typically a portion of each practice (usually the beginning) is focused on endurance through a 20-30 minute drill that consists of varying your speed and demonstrating derby skills for a continuous time. Depending upon what kind of shape you’re in during the season, these drills can be anywhere from grueling to fun. Or both. So the more opportunities you have during the week to participate in off skates endurance-building exercises, the better. 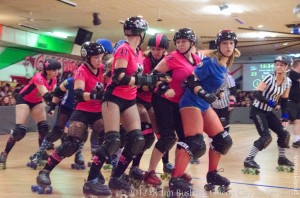 Endurance refers to the ability to stay active for a long period of time and to withstand and recover from trauma and fatigue. This means we can skate longer and harder with less likelihood of tiring out or getting hurt. Sign me up!

In roller derby (and every sport) it’s important to cross-train by participating in other sports/exercise to improve your overall athletic skill. So it makes sense to combine your cross-training workouts with your goal of building up your endurance. But how does one build up endurance?

Kateri Walsh, a senior captain of the Women’s Cross Country team at SUNY –Fredonia, says that the best way to build endurance for long-distance running is to build up your mileage (how many miles you can run in a week). You can start with 1 mile everyday. After 1 week (7 miles) you would bump it up by alternating the mileage each day, so for instance you’d run 2 mi. on Monday, 1 mi. on Tuesday, 2 mi. on Wednesday, 1 on Thursday, etc. totaling 11 miles for week 2. Each week you would gradually be increasing your total weekly mileage. The women on the Fredonia XC team run 50 miles a week from July to the end of season (typically end of Fall).

Wow. That is some intense running. Few of us would be able to adopt such a rigorous training schedule but we can certainly adopt this strategy of gradually increasing the time we spend doing our chosen activities. Come to think of it, that endurance warm-up at the beginning of practice used to be for 15 minutes, then it became 20, and now a 25 or 30-minute warm-up is pretty typical. Sneaky.

Some of the skaters on QCRG do run during the week to cross train. Lo-Hits Griffin (DD/Furies), and Abercrombie & Fists (KO/Furies) like to sign up for races (i.e. Tough Mudder, Turkey Trot) in order to have a goal to keep disciplined on training. Some skaters also get in their local indoor pools and do laps in order to improve endurance and overall physical fitness.

However roller derby is not a static skating contest for 60 minutes; it’s a stop and go, slow and speed, jump, sprint, hit, fall, get up, plow, get back, non-stop dance that changes each time you play. For that reason, it helps to throw in some sprint workouts when running, swimming, biking, or working on an exercise machine.

Two of our league’s top jammers, Addy Rawl (LEF) and LiBRAWLian (KO/LEF) use weightlifting to improve their endurance. BRAWL’s routine consists of a combination of heavy weights + short rest periods + high volume (i.e. reps). She highly encourages athletes to use heavy weights in order to truly challenge yourself during your workouts. Addy similarly uses weightlifting along with off skate quick feet drills in order to improve transferrable foot skills (all that jump, stop, sprint stuff mentioned about earlier).

Though we typically specialize in one position during a bout, we regularly don the helmet panty of jammer/pivot during our scrimmages and practices. In other words, anyone can be asked to jam or block at anytime and you want to be able to take on whatever role is needed of you at that moment – and you also don’t want to run out of steam when your team needs you. So be sure to consider the important role of endurance when training to be your best.