In derby your best defense is a tight wall of at least two players, preferably three or even four. A one on one might work for a while, but not long enough. Working together defensively, a team moves as one – shifting across the track, covering empty spaces and cycling to relieve the engaged blocker. Working together offensively, a team breaks up walls and gives added energy to the jammer with a
whip or a push.

Working together is the key. And, not coincidentally, that is also the essence of a successful community.

What we learn in derby often translates into life. QCRG has been giving whips and pushes and helping build community walls ever since its inception in 2006. It is an integral part of our mission. 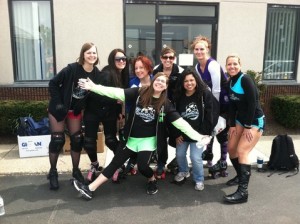 We give a donation at each home bout to a charitable organization that supports women and children in WNY throughout our home season. But, even though our home season has ended, that doesn’t mean our commitment to our community has ended. The volunteer season lasts all year long.

During the last season, QCRG league members volunteered for several organizations. We donned painter’s caps and grabbed paint brushes and joined Brush Up Buffalo to paint homes of families with low income. Their mission is to revitalize WNY community spirit and bring a new feeling of hope.

QCRG gave a whip to clients of the MS Society. They loved the idea of a “whip” so much that they named a program after it. The MS Whip event honored the caretakers and other supportive friends and family in the lives of patients with MS. QCRG helped staff the event.

The Feed The City concert on November 18, 2011 was a concert to benefit the hungry and homeless in Buffalo. Many local rock bands and performers took the stage of the Town Ballroom, and the QCRG was there to help and support their efforts. 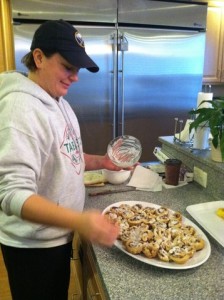 On December 3, 2011 QCRG joined other Western New Yorkers for the annual Polar Plunge. People risked hypothermia to help raise money for the Special Olympics by running into a very cold Lake Erie. Some stayed in seconds, others a minute or two. But they all had a blast during this event.

On March 31, 2012, QCRG went downtown to the campus of Roswell Park Cancer Institute where the grounds were transformed into an Easter Egg Hunt for the patients. QCRG volunteers helped out with the hunt, decorated cookies, and handed out prizes to the winners. And a few of them might have snuck in a chocolate or two.

On April 28, 2012 QCRG helped out at the Walk a Mile in Her Shoes event. This event, which is designed to create awareness for sexualized and gender based violence, is actually a walk with male participants – walking in high heeled shoes. We were simply there to support and encourage.

In May, UNYTS, a non-profit organization trying to enhance life through organ, blood, eye, and tissue donation, pulled their donation van into the rink parking lot and QCRG came out to organize the event, donate blood and sign up for tissue donation.

Also in May on a rather rainy, chilly day, we helped out in our “hometown” of North Tonawada with the annual Clean up the Canal Day.

June saw the annual .5K Stiletto Run which raises money for the Ovarian Cancer National Alliance. There were skaters who participated by running in their high heels and others who started the run off on their skates. Others walked throughout the crowd with donation boxes.

QCRG also helped with the MS Society Golf Outing in June. We staffed the beverage carts during the sunny day and helped sell raffle tickets to raise money for the MS Society.

On July 13, QCRG helped out at Kenmore Lanes during the Spare the Zombies event. Bowlers brought canned goods for the WNY Food Pantry and a portion of the ticket price was donated to various WNY charities.

In August we will be working on various outdoor projects with Buffalo ReUse. This organization deconstructs old houses and then sells the various items to people who are renovating homes.

Our big volunteer event in September isn’t exactly a Western New York community event (though we are hoping that all WNY derby fans come out to enjoy it). It’s a grand derby community event. QCRG is hosting the North Central Regional Tournament in Niagara Falls and we will have all hands on deck for that event. Keep your eyes on this website for upcoming details.

And then in October QCRG will participate in the Take Back the Night rally. We will be skating alongside other UB students, faculty and staff on UB North Campus to raise awareness about sexual assault and domestic violence.

Look for more volunteer events and join QCRG give an assist to the WNY community.