On Saturday, April 28 the Ice Ice Babies (we call them the Icies) made junior roller derby history. They played their first full bout in Barrie, Ont. against Toronto Junior Roller Derby in what is rumored to have been the first ever international junior derby bout.

The Icies formed in November, and meet once a week to practice. Until that Saturday, they have only played two intra-league bouts when they split into two teams and played each other.  Those bouts were 20 minutes long and the jams were timed at one minute. 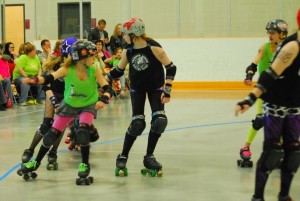 This was the first time they took the track to face an opponent they didn’t know and it was the first full length game (two 30 minute periods) with two minute jams. It didn’t seem to affect these young athletes.  Their excitement about their first real bout , combined with their deep bench, kept them alert and ready to skate.

On the other bench, Toronto just celebrated its second year of junior roller derby. Their experience showed in their solid walls, cycling and well time pushes and bumps to help their jammers through the pack.

The Icies brought 26 girls to the bout; Toronto’s roster was 22.  The Icies seemed to have more diversity in size and age.   But as Toronto soon learned, small doesn’t mean easy to get around. Some of the smaller Icies, including Derby Doll, Animal Jam, and Ashzilla made effective blockers. In one memorable jam, Derby Doll held the much taller Toronto jammer in a one on one.

They weren’t the only blockers doing a good job of holding the Toronto jammer or whipping their jammer around the pack. 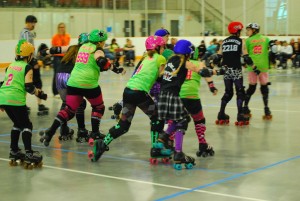 One of the many Icie jammers, Lil Blade, had a lot of success up against the formidable Toronto blockers.  She kept her speed despite the slippery floor and was able to thread her way through. Veggy Cowgirl, as always, was strategic when jamming, keeping her eye on the pack and calling off the jam at the right moment.

There were several full two minute jams — with a lead jammer.  It wasn’t because they jammers didn’t hear their coaches telling them to call it off, either. The girls just wanted to keep skating. And so they did. Sometimes the point differential was very slight; maybe 2 points, maybe 4. The blockers kept blocking, the jammers kept making their way through the pack.

One indication of experience winning out over determination was a four man wall held by Toronto when Lil Blade was jamming.  Toronto’s wall was loose but each player had their hands stretched out to their teammates.  Lil Blade didn’t know or remember that she could go through those hands and that if Toronto held her back they would get sent to the penalty box for a multi-player block penalty.  All she saw was an impenetrable wall. That doesn’t say anything about her abilities, just her experience. 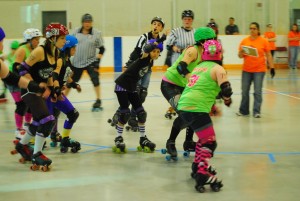 Just like the adults, the Icies got into some penalty trouble and Toronto had several power jams helping them increase their point spread. But Toronto was no stranger to the penalty box, either.  And both teams were, at times, confused about how to serve the penalties.

The Icies struggled at times, to maintain their walls for and weren’t as practiced at maintaining them under pressure.  They worked hard and communicated well during the jams and the errors they made could be chalked up to inexperience.

In the end, experience made the difference and Toronto won the bout with a final score of 194-136.

The Icies play again, in an intra-league bout, before the June 2nd Championship game.

The Icies who played in the Toronto game: