I recently saw a meme on Facebook that had the 10 commandments of roller derby. I liked them. I laughed about them. I realized I know some people who live by them. But it also got me thinking there was one thing missing off the list entirely – the officials. While we who wear stripes or pink cannot be here without the skaters, neither can the skaters be here without we who wear stripes and pink. We have a love/love relationship with each other … most of the time. Granted, there are disagreements – just like in anything else, people disagree and argue – but that’s part of life. If you have ever stepped off the track as a skater and into a ref lane to watch what we watch from our vantage point, you might have become a little dizzy or overwhelmed by it all. If you’ve heard an official repeat a rule from memory, you might have been impressed – but it’s not a party trick, we learn and study the rules. 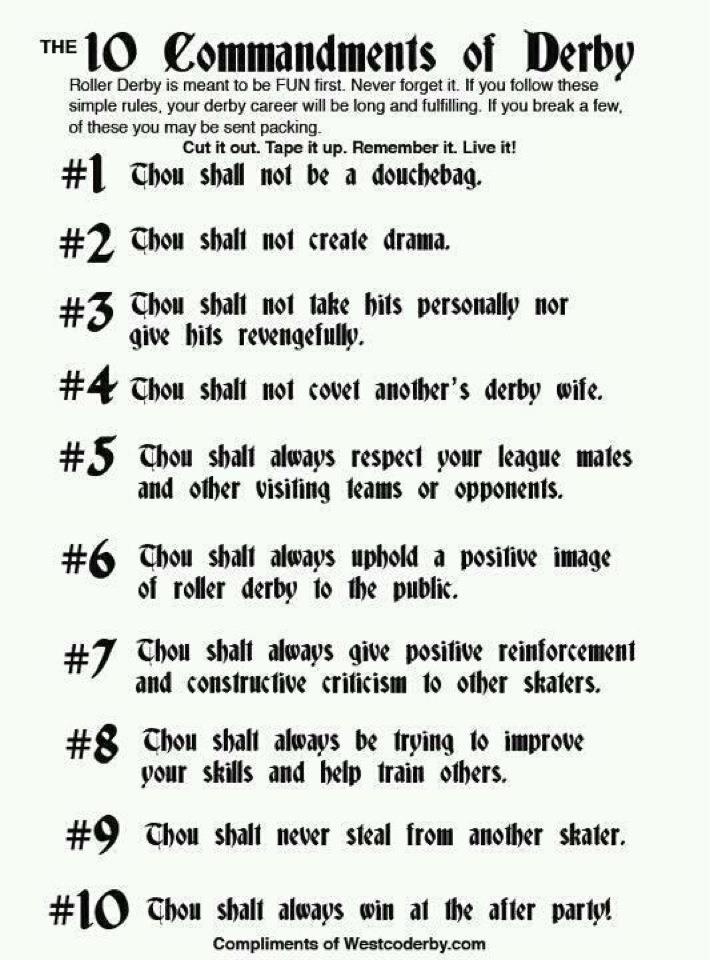 Every time an officials puts on stripes or pink at a bout, we’re stepping out in front of 2 teams, coaches and bench managers and of course the crowd – filled with families and friends and derby lovers – that might not like your enforcement of the rules! And those fans are not afraid to let you know it. Sometimes with words, booing (my personal favorite given my name), dirty looks, an open mouth gape (affectionately known as the “WTF” look) or screaming. Since the rules changed, I have not received any of that type of treatment by a skater – and since I personally put on stripes, my home league several years ago have never ever witnessed that type of treated toward myself or any official in our league. Most leagues and skaters I have encountered leave any disagreement on the track.

But what we do – what our job is – as I said is enforcement of the rules. We don’t make them up, we don’t change them for our own benefit, we don’t call them differently to give one team an advantage over the other – they are written down and it is our job to follow them and make sure the skaters do to.

Are we perfect? No (I know, you’re shocked). Do we make mistakes? Yes (again, I know you’re shocked). But one of the rules of officiating is unless you’re 100% sure, you don’t make the call. When you’re a skater, you skate based on feeling and sometimes you feel a penalty – but we use our eyes and you can’t always see what a skater feels. But trust me, as an official, after the final whistles blow – we replay and re-live a bout in our heads too. And you wonder if you made the right call. You go back and look at footage to see what it shows – but we don’t have instant replay in derby. And you can’t beat yourself up when you do something wrong – you can only study what you did, set it aside and move on to try to do better the next time. But as an official, you can’t concentrate on just one rule of the game, because as soon as you do, you might miss something else. Such is the life of an official. Your goal is perfection, your hope is correctness.

So here are my 10 commandments of officiating: