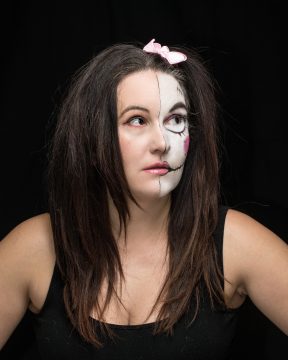 This month’s featured skater is a long time veteran of Queen City Roller Derby. As our league’s safety officer, she always makes sure skaters and officials are safe, but that they have fun, too.  Meet #610, Wailing Wench!

Wench joined QCRD in 2011, back when the league was still playing at Rainbow Rink in North Tonawanda. She’s seen many changes in the league throughout the years and has played on every single home team. This yoga-loving, coffee-drinking skater is someone you want to have on your blocking line, and someone who can give you some great tips for your garden!

Where are you from?

I was born in Buffalo, but I grew up in Kenmore.

What is your day job?

I’m a Physical Therapist Assistant in a rehab clinic.

How did you get involved in derby?

I ran into my husband’s cousin, Casual Sexist (former Alley Kat), at a family function and she said I should play. Wrecks Kitten (current Devil Dollie) was also an acquaintance of mine. I went to an afterparty where she also said, “You should play!” I just thought it sounded fun to play and I wanted to try it.  I just joined even though I’d never been to a bout and showed up to boot camp! Wrecks is THE BEST ambassador for the league.

What are some of your hobbies outside of derby?

I garden and dabble in crafts. I LOVE coffee and I love it more than most people do. I make it at home all the time with my bean roaster. Even though I’m really into my coffee, I’ll drink any kind of coffee so I’m not quite a coffee connoisseur (I appreciate, I don’t discriminate!). I also do yoga a couple times a week, but nothing high impact. It’s something I enjoy and it brings me that internal focus, which is an aspect I really enjoy about yoga.

What is the significance of your derby name and number?

I named myself after a beer made by Middle Ages Brewery in Syracuse. My number is completely random. I couldn’t pick one and I told the person who was in charge of boot camp to assign me a number.

Rumor has it you’re quite crafty.  What are some things you like to craft in your spare time?

I’m kind of a scatterbrained crafter. I don’t really have one thing that I focus on. Sometimes I’ll do stuff and forget about it. I’ll decide to make jewelry for awhile and then I’ll keep all the stuff and see it two years later and decide to make jewelry again. I’ve been crocheting a shawl since Thanksgiving, so I’m also not really a speedy crafter.

You’re an avid gardener.  What are some of your favorite things about gardening?

I think it’s very peaceful. I think it’s something that you can learn and evolve from doing it each year. I plant flowers, fruits, and vegetables. For my flower gardens, I try to plant all native species. I tend to plant the same things every year like tomatoes and cucumbers, but I also like to pick two things that I’ve never done before and try something different. Sometimes it’s a total disaster, but I think it’s just fun to try.

[My favorite time of the day gardening is when it’s really hot in the summer. EDIT] I love to get up really early before work and nobody else in the neighborhood is up. It’s so quiet and I can drink my coffee, go out with my dog, and work in the garden. It’s so relaxing before work. I live close to the city and it’s almost loud all the time, so it’s such a peaceful time of day. Shout out here to Nicky Needles (QCRD REF) for inspiring me to add so many flowers, she was my inspiration.

Tell me about your pets.

I have two cats and a dog named Franklin. The cats don’t have real names because I made up their names. One cat is Rosie or Rosebud, and the other cat is Pookie or Fatty.

You played on the Subzero Sirens for a season.  What was it like playing on a travel team versus a home team?

It’s definitely a lot more intense. The practices are more focused and it’s all business. It’s good to put yourself towards a higher level of skill though. I liked the higher level of intensity and I liked being pushed. Everybody got along really well on the team and we worked hard together for the team.

What is your favorite thing about blocking?

I like blocking because then you’re only focused on one task at a time.  I think that’s more mentally challenging for me. When you’re jamming, you’re like “I’m gonna go here, I’m gonna go there,” whereas blocking the goal is to just stop the jammer or play some offense. I just like to stay focused on what I’m doing.

Do you have any advice for new skaters?

My advice for new skaters is to worry about one thing at a time and that everything will kind of come together. You go to all these practices surrounded by people who are so talented. I tell these new skaters that you don’t have to do all the things right now, but if you go to every practice and you’re trying to do everything at once, you’re going to feel very frustrated with yourself. You can’t do all the things in one day, so you have to just focus on a skill you’re trying to improve on. Whether it be working with your teammates or your footwork, just worry about doing that skill. It’s not all going to be one day where you go to practice and you’re going to be the best teammate, do the best blocking, or do the best jamming. It’s one thing at a time!