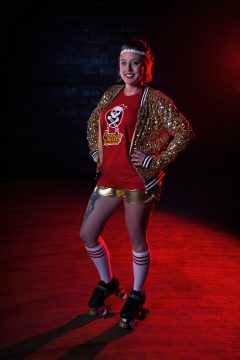 This month’s featured skater has made quite the impact these last couple of years with Queen City Roller Derby. Don’t let her sweet demeanor fool you, you don’t want to go up against this blocker on the track! She’s the oldest of four children and is a lover of Disney, Pixar, and all things octopi (she even has an octopus tattoo that she’s named Leslie!). Meet #113, Oopsie Daisy!

Daisy has been involved with QCRD since 2016 when she joined our boot camp. Daisy was later drafted to the Alley Kats her rookie season, then the Saucies quickly snatched her up after last season’s scramble, helping the Saucies to win the cup at last year’s Championships. Daisy also made the jump to travel roller derby last season when she made it onto the Subzero Sirens. Though she may be a fearsome blocker on the track, she’s involved with the league off skates as well with our gameday committee and helping out our new recruits in boot camp.

Daisy has a lot of goals she wants to accomplish, and we can’t wait to see where her derby journey takes her!

Where are you from?
I’m from East Irondequoit, NY, outside of Rochester. My parents come to Buffalo for every game!

What is your day job?
I work for Solidifi which is an Appraisal Management Company (AMC). Basically, we work with banks to get consumers appraisals for their mortgage loans. I work in a more technical role, supporting the platform in which the operational staff perform their day-to-day.

How did you get involved in derby?
My friend Maggie and I saw a bootcamp ad on Facebook (less than a week before the next bootcamp started), and decided it would be fun to try! I didn’t know anyone in the league prior to bootcamp.

What are some of your hobbies outside of roller derby?
Derby takes up a lot of time, but I like taking fitness classes and spending time with my dog. I’m also a certified scuba diver, though I don’t get to take part in that as often as I’d like. Diving in cold water isn’t my favorite, I prefer warmer, clearer water.

What is the significance of your derby name and number?
My derby name sort of came to me- I’m not the most graceful person and often trip over air while standing still.

My number is pretty significant though. Every Pixar film has an Easter egg: they hide A113 in their animations because it’s the classroom where the animators learned their craft. I worked at Disney for a bit, and fell in love with Pixar. It was my tribute to Disney!

Choosing a derby name is pretty difficult. I originally picked Daisy Juke because I thought it fit me- I was going for a “sounds nice” nickname, but hoping for the “knock you on your butt” outcome. After playing for a season, I didn’t really feel a connection with the Juke part and decided to change it to Oopsie Daisy. I thought it fit me better personally; if you’ve ever played with me I’ve probably apologized to you on the track (or off). I mean well, but sometimes I can’t control my limbs.

Last season, you made it onto the Subzero Sirens. What was that experience like? How was it different playing for a travel team vs. a home team?
It was a learning experience. I felt like I learned a lot from being on the Sirens and getting thrown into uncomfortable situations. We did a lot of drills that we didn’t necessarily do on home teams so I think it helped me become a better skater. Playing in Sirens games was also different. It was almost less stressful than playing on a home team because it’s fun to play against people you don’t know and it’s a completely different experience because of that.

For the Sirens, we don’t really have rankings, we didn’t have any wins vs. losses that we were shooting for, it was more about personal growth as a team and a different set of goals for Sirens than for home teams. For home teams, everyone is trying to win the cup, so there’s an end goal for them. For Sirens, it was more about growing as a skater and a teammate than winning something.

You had the opportunity to spend a semester working for the Disney College Program. How was that experience?
It was the greatest! I made some lifelong friends, and was the closest to being a superhero than I will ever be! I was a Character Performer. I did theater and dance in high school, so I auditioned for the Entertainment Department and got in as a character performer. I was friends with Buzz Lightyear, Eeyore, and Lotso and a green army man from Toy Story. I worked in Pixar a lot.

Tell me about your pets and your love of octopi.
I have a dog named Jake who we adopted a little over two years ago, a cat named Flynn Rider, and a cat named New Cat (she’s had other names but nothing stuck). I love octopus because I used to volunteer at the Aquarium of Niagara. I ran an enrichment program with their exhibits and the octopus was my favorite. Those experiences really stuck with me and I find the creatures so fascinating!

What is your favorite thing about blocking?
I really love when you’re on a line that’s really jiving together well: everyone is communicating and you’re in control of what’s happening. It’s so easy to overreact and lose control, but getting to a point where you trust your teammates and can control the outcome of the jam is amazing!

Do you have any goals for yourself this upcoming season?
Primarily, I hope to make the Subzero Sirens again for the 2020 season. It’s a great opportunity for extra skate time to challenge yourself, and grow as a derby player. As for small goals, I really want to watch more footage, work on effective offense, and nail hockey stops.

Do you have any advice for new skaters?
Attitude is everything, and a little positivity goes a long way! No one is there to tear you down, everyone only wants to help you become an amazing derby player. Take any suggestions you might get and apply them. Listening to feedback and showing you want to improve is huge! Also, put yourself out there and get involved. Contributing to the league is almost just as important as skating skills, and it really helps you meet people and make new friends!