There are very few things in life that most derby girls fear, but if you ask members of the Queen City Roller Girls what can leave them shaking in their skates, you will likely hear this skater’s name mentioned in their response.  Among QCRG’s league members – skaters, refs and NSO’s – her game face is legendary!  She has a quiet strength and fierce competitiveness that will leave the opposing team wondering if they will make it out alive when they go up against her.  While her game face can be scary, once she delivers the first hit of the game – that electric smile beams across her face … and some players aren’t sure which is to be feared more!

This month’s player of the month is CU~T!  She has been skating as part of QCRG since the first season.  She played for four years as a key member of the undefeated Suicidal Saucies as well as being a member of Team QCRG, our league’s all-star team which is now known as the Lake Effect Furies.  CU~T served as co-captain and then captain of the Furies, helping to lead them during our WFTDA apprenticeship, through our first year as full WFTDA members.

CU~T has worked tirelessly behind the seasons for QCRG too.  She was a member of our board as representative for the Suicidal Saucies for multiple seasons helping to shape league policies and leading to its growth.

Scary as she may be to skate against, CU~T is also one of the first veteran skaters to help rookies as they find their way in the league 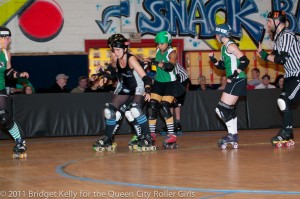 and in the sport.  She is always willing to help guide newbies and reassure them they can find a home within QCRG and welcome them into our derby family.

And all of her teammates – past and present – know that if they are looking for an amazing cook or crafter, CU~T is the person to go to.  Her cooking skills are unbelievable and her cross-stitch is fantastic … but don’t tell her opponents she’s our Martha Stewart because they might get the wrong idea.  Actually, maybe you should – then they won’t know what to do when they are hit by one of her incredible blocks that come out of nowhere!