However you look at the Queen City Roller Girls, you cannot help but see Dr. Dementer. She’s shined as a skater, a captain and was instrumental in the earliest grassroots efforts.

Doc joined QCRG the first summer of the league in 2006 and clearly had outstanding talent. While many of the early skaters were still working on their skating and struggling to stay upright, she was already hitting like a truck. While the majority of the early skaters were grappling with the basics of rules and scoring, she was conceiving strategies and counter-strategies. Drilling and scrimmaging against Doc with her spidery legs and bottomless endurance raised the bar for the entire league. Always willing to spend a few minutes with a struggling skater, Dr. Dementer showed true commitment from that first season culminating in superb management of our Training Committee during the 2011 season. 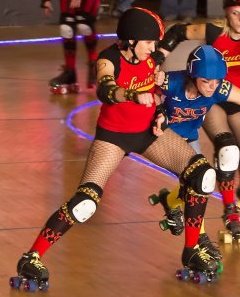 Some of us old lifers recall that when QCRG really began to grow, every string you tugged on seemed to lead back to Dr. Dementer. Where would QCRG be if we hadn’t had the benefit of her creativity, her passion and especially her marvelous organizational skills in our formative years?

Elected one of our first three captains, she conceived the Suicidal Saucies and inspired her team to be hard workers and gracious winners. The longest running captain, Doc led her team to four consecutive championships. She did this leading by example, never asking her team to do anything she wasn’t already doing herself and inspiring her team to always push for more. The Saucies’ e-mail group will forever be called Demented Dames in her honor.

Doc skated with the all stars from the earliest days of Team QCRG through to present day where she’s been a fixture on the Lake Effect Furies. It is lesser-known trivia that it is none other than Doc who introduced the Furies to their mascot, the Yeti. Competitive, hard-working, funny, wise and fair- she embodies what derby is about, and no one seems to hold it against her when she checks them into next week!

We’re sad to announce that Doc is heeding the call of her career and heading out to Champaign, IL where she will continue to be amazing at everything she does. We are tremendously sad to see Doc leave us after five amazing years and just want the world to know that any team on Earth would be lucky to have her. Thank you and good luck, Doc!