Skip to content
Since 2015, the Queen City Roller Girls have called the Buffalo RiverWorks Event Center their home. Located along the waterfront on Ganson Street, RiverWorks is one of the Buffalo Brewery District’s newest offerings, providing their own growing mix of hospitality and entertainment.

Buffalo RiverWorks is an adaptive reuse of the former GLF grain mill operation and serves as a multi-purpose recreational and events center. The 60,000 square foot indoor event center features multiple bars and restaurants, a 5,000 person concert venue, a 1,500 person banquet facility, and space for trade shows, corporate events, and conventions. The 50,000 square foot covered outdoor ice rinks serve as a venue for ice hockey, roller hockey (in summer), box lacrosse, and curling leagues. All of this is located a mere half mile from Keybank Center and Canalside, along the Buffalo River.

While most leagues in our sport use spaces like roller rinks and basketball/hockey arenas, we’re lucky enough to have a purpose built roller derby facility in RiverWorks allowing us provide an ideal viewing experience for our fans. Our move to RiverWorks has also allowed us to move to the city, ensuring that QCRG will play within the Queen City itself and to actively participate in the overall revitalization occurring downtown.

When do you play games?
We primarily have bouts on Fridays, Saturdays, and Sundays during our season, which runs from January to early June.

How can I see a game?
Tickets can be pre-purchased online, or at the door through the RiverWorks box office on gameday (beginning 1-2 hours before the game). Click Here for more details on seating and pricing.

Where does QCRG practice?
We spend most of our practice and scrimmage time at RiverWorks. These practices are open to spectators and fans, so you are able to see the effort our skaters put into improving their skills!

What is the track surface?
Polished concrete, with the track actually permanently surfaced; leveled, colored and textured to our specifications. 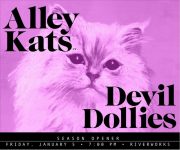 It’s the start of the 2018 Queen City Roller Girls season! The defending Champion Alley Kats take on the Devil Dollies in this title game rematch!

The Suicidal Saucies make their 2018 debut against the Devil Dollies.

The Kats look to avenge their only 2017 loss against the Suicidal Saucies as they meet for the first time in 2018.

Are you thinking about joining Queen City Roller Girls as a skater or referee? The next boot camp starts on February 25th at 8 a.m. at the Rainbow Rink in …

The Kats & Dollies square up for the second time in 2018.

See our travel teams kick off their 2018 season with this mix-up exposition!

The Saucies and the Dollies meet up for the second time in 2018.

The Furies and Sirens open their 2018 season against Ann Arbor Derby Dimes in this DOUBLEHEADER match! (Furies vs Ann Arbor A at 7PM, Sirens vs Ann Arbor B at 9PM)

The Kats and Saucies face off in the final game of the home team season before Playoffs!